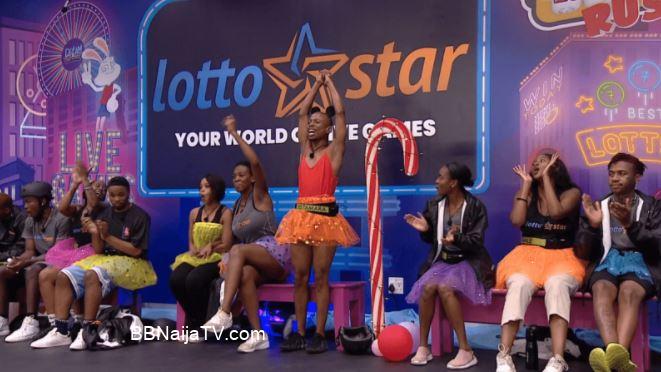 This game put the Housemates’ reaction time, hand-eye coordination, and short-term memory to the test.

With a few small exceptions, the regulations are generally consistent week in and week out. There are usually arrows on the floor to direct the Housemates, with clear’start’ and ‘finish’ markers. Biggie restored the disqualification in addition to the 30-second punishment this week.

The winner of this week’s prize gets a chance to win R10,000 from LottoStar, the sponsor. The Housemates had a lot more riding on the storeroom being unlocked this week, and it was clear that they were determined.

The game would start at the sound of the buzzer.

Marshmallow throw – There were two jars filled with marshmallows and the Housemates could pick from any of the two and they had to try and put at least one marshmallow in any of the nine cups on the table.

Balance the cupcake – The Housemates had to take two cupcakes on each hand and put one on top of the other and balance over the plank and make sure that they don’t fall, if they did fall they’d have to start again.

Candy Olympics – There were five different sweets in five different bowls and a bow with straws. The sweets would then be placed on the table across from the bowls. They would then have to blow sweets off of the table and they had to dispose of the straw and each Housemate would have to use a new straw for their round.

Heart Sushi – There was one bowl with five heart-shaped sweets and another bowl that was empty. The Housemates had to use chopsticks to move the sweets from one bowl to another and if one fell they would have to start from scratch.

There were balls with numbers on them.  The buckets were numbered, one, two, and three. The number you get determines which puzzle you get, you take your bucket to the section and build your puzzle. Needless to say, this game really defeated a lot of the Housemates.

The winner this week was Sis Tamara, making them a two-time winner! They finished with a time of 03:26.