See What the BBMzansi Housemates Think of Themselves 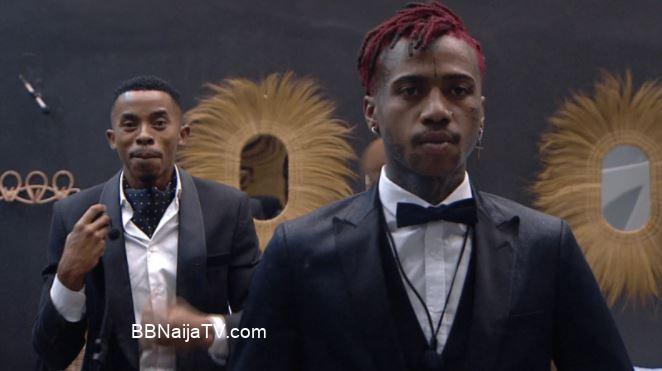 The Housemates began conversing about what they thought of each other when Biggie urged them to leave the House and go into the yard.

First place was obvious and the Housemates had to deliberate over second and third place.

The Housemates came up with only twin names for this category and the nominated Housemates laughed and mentioned how sad this was because they’re the only two who don’t actually get an action in the House.

This was one of the categories where it was unanimous. Tulz admitted to being a competitor. but me times that this Housemate even puts his helmet on before Biggie reads out the rules in the Friday Night Games.

Two Housemates were mentioned in this category and one of them is said to not be able to use a shower stall where there’s no mirror because he always wants to admire himself while showering.

This was also a unanimous vote and no one else came up for nomination.

Some of the Housemates tried to mom ate themselves in this category. Nale and Terry screamed “me” and everyone disagreed.

There was not much debate for this category and it came up because people were arguing that she is not the kindest but agreed that she’s the most optimistic and says things like, “guys, let’s just try and have fun.”

Terry felt that this category could not be real because there are people watching who know them so she didn’t think that none of them are lying and Tulz pointed out that they don’t know what the audience is seeing.

Who will most likely switch up?

The Housemates all agreed on one person and another name was thrown into the mix and the late entry definitely agreed. The first person who was nominated was shocked and he said he feels like the Housemates don’t know him.

Who is most likely to have a spin-off after the show?

Who is most like to go into presenting or acting

Who is most likely to struggle with fame?

The Housemates felt like this person would struggle because she’s super calm and would probably end up running away if cornered for autographs and pictures.

There were some pretty heated takes, and it was fascinating to see the Housemates speak openly about how they saw each other rather than behind one other’s backs.