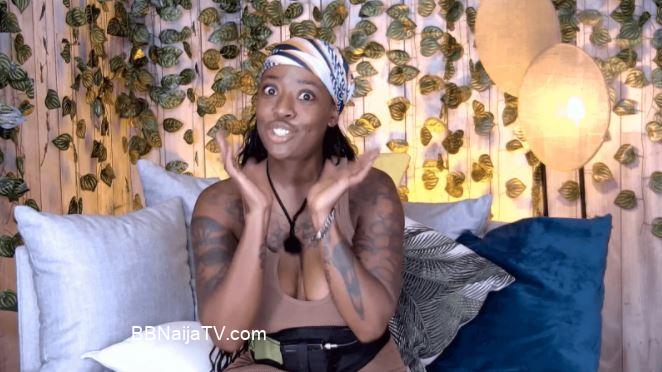 The Big Brother Housemates who were Nominated on Monday were summoned to the Diary Room earlier this evening to discuss their status on the block, as well as the game’s many twists as a result of recent occurrences like as the introduction of the Conspiracy Corner.

We’ve compiled a list of some of the highlights from each of the Nominated Housemates’ Diary Sessions earlier today. Here is the gist list for your reading enjoyment.

Vyno was surprisingly tolerant about the situation when he ended himself on the Nominations list as a result of Sis Tamara’s use of her “Save and Replace” Power to save Tulz. At least at initially. “I see why Tamara acted the way she did. She tried to explain things to me.” However, his tone became a little more abrasive a little time later. “I’m not opposed to people nominating me, but if you’re going to give me a reason, it has to be good.” “If” is the key word here. Sis Tamara is under no duty to provide any explanations.

Sis Tamara has saved Tulz twice now, both times by putting Vyno in his place. Sis Tamara has an affiliation with Tulz for whatever reason, albeit Tulz may not be aware of it.

“It adds to the tension that’s already there,” Vyno remarked of the Conspiracy Corner. It serves as an excellent reminder to keep your head in the game.”

Nthabii said it was “hectic” for Sis Tamara to have to choose between Save and Replace in front of the entire House. “We know that the Big Brother House is not supposed to be comfortable,” she added after more consideration. It was unavoidable.” She appeared to be at ease when it came to her own nomination. “Whatever comes my way, I’m ready.” It wasn’t that surprising to be nominated.”

“This week, the game is getting tighter,” she added. “[The Housemates] are apprehensive about using the [Conspiracy] Corner, but I believe they want to.”

Gash1 was likewise impressed by Sis Tamara’s Save and Replace. “Tamara used that as a power maneuver, putting all the individuals we think are powerful on the chopping block.” That statement reveals his opinion of Vyno as a strong challenger.

As to how his strategy is going, he says that he has deliberately displayed different personalities at different times. “Everybody has different ideas about me. I wouldn’t say they have figured me out.”

Yoli finds herself on the Nominations list for the first time since entering the House, but says she wasn’t very surprised. “I had a feeling I was going to be Nominated, because I hadn’t been yet.” That said, she’s not exactly as confident as she was. “When I came into this House, my feeling of winning the R2 million was at about 94%,” she confesses. “Now, I feel like I’m at a 60% chance.” Which is still pretty confident, really.

About the new twist, Yoli said, “I love the idea of the Conspiracy Corner, because we weren’t expecting it. “If we had more time, I think people would have engaged more in the activity.” She makes a good point. We’ll have to see how much they occupy the Corner after this Sunday’s Live Eviction Show.

Like Yoli, Terry was not surprised to be on the Nominations List, and for the same reason. “I actually expected to be Nominated, because I spend four weeks without being Nominated.” She also said that she suspects her relationship with Vyno might have something to do with it – they are both Nominated, after all.

Norman knows what it’s like to be Nominated. “Back again! I’m getting used to it.” He also thinks he’s going to have even more time to get used to it. “It’s something I’m predicting for the rest of the season,” he said, but even that doesn’t seem to bother him too much. “If you keep throwing me in here, and I keep coming back, that means you should be scared.” He makes good point.

Themba thinks that many of the Nominations were made simply to keep people on their toes. “Those who did not stand up had to stand up. They had to be tested.” In this context, “standing up” is House jargon for being Nominated, since each Housemate must rise when their name is called during the Nomination announcements. “I Nominated Yoli because she never stood up, Tulz for the same reason. And Terry. They have to also be on the chopping block.”

Regarding the Conspiracy Corner, Themba is under no illusions that people will always be honest while they are there, “but you can see their intention by what they say and how they say it. If you are wise, you will go with as many people as possible.” Themba also made a prediction about Gash 1. “It looks like he’s going to be standing up for a long time. He’s got a lot of stray bullets pointing at him.”

It’s going to be an interesting few days for the Nominated Housemates. There’s the Wager Task of course, but the main issue is that they don’t know if this Sunday will feature on Eviction or two. It could even be a Triple Eviction! They’ve been known to happed…