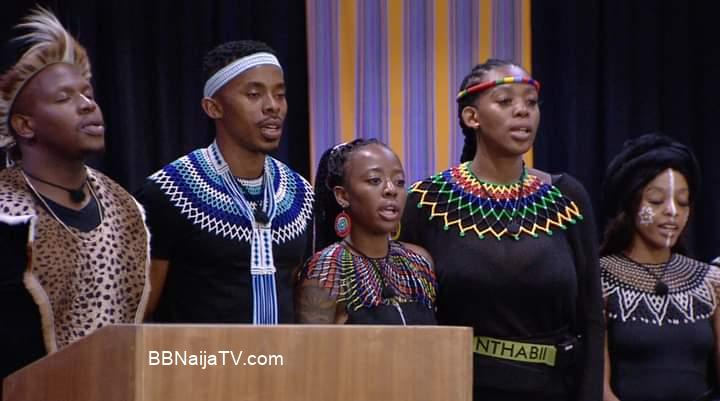 It seemed only right that this week’s Wager Task be a celebration of heritage in the #BBMzansi House.

The Housemates had to imitate and change various aspects of South African heritage to fit into their narrative.

It represents their characters in the House. The mountains signify their journey and the ups and downs that they have gone through. The colour blue on the flag signifies the tears that they’ve shared in the House and also represents Shower Hour.

They chose a flamingo. It can adapt to any environment. The feathers turn bright pink when they’re are properly nourished. Their flamingo was wearing shoes to symbolise the new paths that are about to open up for them.

They chose an an owl because it’s a wise old soul, whose presence is felt and it also has a  rotating head so it hears and sees everything like Big Brother. Big Brother chose them in the dark times and when they felt that the world had forgotten them.

They chose a Sunflower. It signified their bright futures, it’s a flower that speaks to friendship and the relationships that will blossom inside and outside of the House.

The anthem signified their diverse personalities, it was rooted in their beliefs and in themselves. It was the anthem of success.

Biggie asked Tulz why he thought they should win, and Tulz answered that even though the mood was low, they were able to put their differences aside and do what needed to be done.

They certainly did, as evidenced by their third Wager Task victory. Housemates, congratulations!